Frantic and fantastic times around these parts…

Most importantly, the impossible happened—advance copies of The Many Adventures of Miranda Mercury: Time Runs Out arrived safely at Archaia’s offices after an international voyage from the printer. Meaning that next week at San Diego Comic-Con, the book will be making its official debut, hot off the presses at booth #2635. Approved signing schedule should go live early next week, but obviously this will be a huge moment for me and the entire creative team that’s worked on this project the last several years. Pic of the gorgeous lookin’ hardcover directly below, followed by a few links to recent press coverage the book has gotten. Should be a big week and stay tuned for further developments. 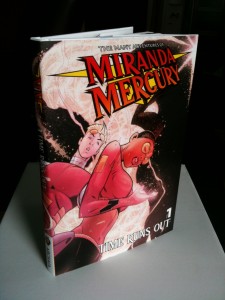 Hot off the presses!

Library Journal looking forward to the release of Miranda Mercury—