Chronology- The Hair of Miranda Mercury

Behind-the-scenes with inker extraordinaire Marc Deering, who among other great things, is the man chiefly responsible for the overall look and feel of Miranda Mercury’s hair. This is something we’ve gotten a ton of compliments about, and from the very beginning, getting it right was always important to us, so I asked Marc to write up some of his motivations and techniques that go into giving M one of her strongest visual features. Following that is a quick collage of some of my favorite images of Miranda and her awesome hair. Break it down for ‘em, Marc…

Let me tell you a story—

Way back when in 2003-2004 sometime, I was a regular Wednesday-goer at my LCS (local comic shop) Amazing Fantasy Comics and Collectibles. The owner knew I worked in comics, though nowhere near as much as I do now. So one day he says to me, “I know you work in comics, and based on some of my customer’s requests, there’s a real need for an African-American heroine. There are plenty out there but none with any real staying power. The kinds of characters that can hold their own book for a long period of time.”

Fast-forward to 2006 and I get contacted out of the blue, by Lee Ferguson. It was a strange day because I woke up to a few e-mails and some PM’s through a website that we both frequented. I’d known of Lee for a few years already, but never had any contact with him. Until that day. He tells me he needs an inker for a creator-owned book he’s working on, and would I be interested. I had had my ups and downs in comics, especially creator-owned, and I was like “Sure, why not? I don’t have anything else going on.” So we got together and started exchanging e-mails, which quickly got VERY long, and went on for pages and pages. He was/is like my brother from another mother. That’s how much we have in common.

So I started playing with this character with my brush and pens. Then came the hair. She has it pulled back in a ponytail, so as to keep it out of the way while “adventuring”. And I decide to take it one step further—let’s make her hair a little “nappy” as they say. My wife is African-American, and I’m sure a few of you readers know exactly what I mean, but it was important to me to get the look and feel of her hair just right. Ponytail and all.

So many times in comics, characters of color are given what you might call a “black-out” feature (NO pun intended) on their hair. Usually because the people drawing them have no idea how to draw their hair, so they give it a basic shape and just fill it in black. I wanted to give it the feel and texture that’s appropriate, and even without the actual colors being laid in digitally, for you to instantly recognize that she is African-American.

To get more technical with it, it’s really just me and a .13 or .25 Rotring Rapidiograph pen scribbling her hair on there, making sure of light sources, etc., but that’s about it. And sometimes, it can take an infinite amount of patience to get it all done, but I hope everyone agrees that it’s worth it in the end. 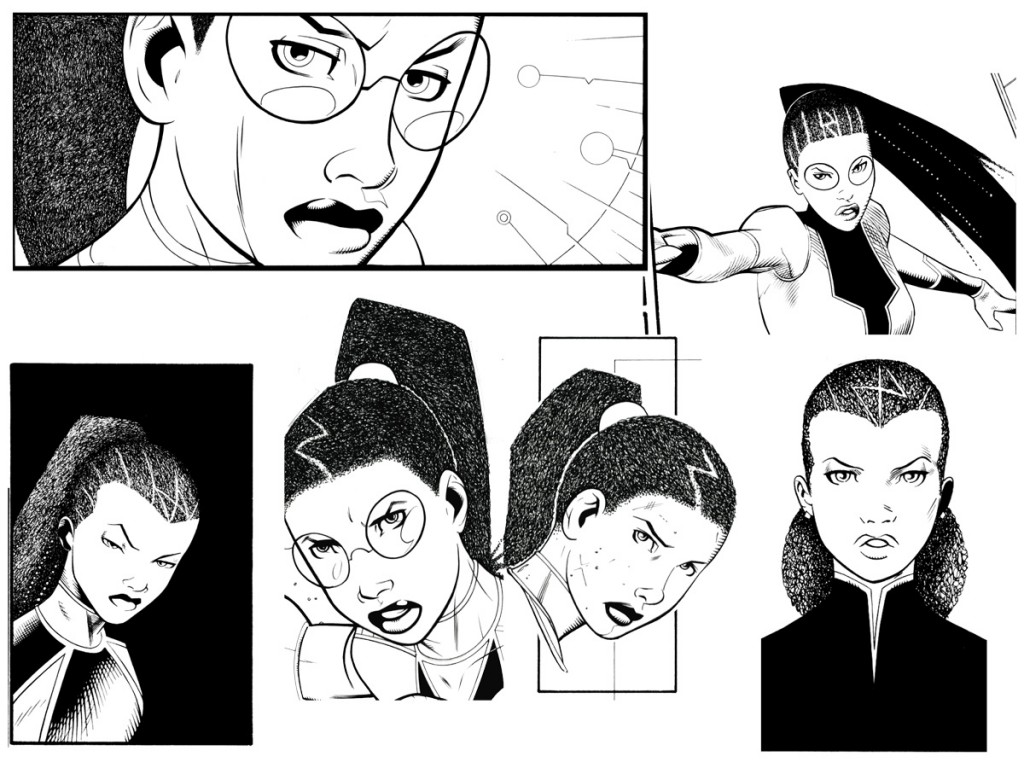