Brandon Thomas: Trying to pick a “favorite” piece of artwork from this book is pretty impossible. But anytime somebody brings it up, one of the first things that comes to mind is what we started calling the “super spread” from issue 297. This two-page spread, which already had to be laid out with the action going right to left and upside down, took Lee several days to draw and really did make me feel like a bit of a jerk. See, we’ve got this running joke that every issue I have to ask him to draw something that causes him to reflexively wish that I have my hands broken. This was definitely that moment from #297 and amazed as I was by the final result, I was also struck by another very strong emotion…guilt.

Lee Ferguson: #297 was a tough issue for me, personally. Near the end of drawing #296, my grandmother was diagnosed with pancreatic cancer, and before I’d even gotten too deep into #297… she was gone. It was a tough time, and it seems, looking back, that my response was to throw myself into the work. I guess that’s how artists cope, I don’t know. But this was a really tricky issue to draw—looking back, I wish I’d settled on the grid format that I’ve been using so much in the later issues (it would have made those missing panels more effective)…but overall, this is the first issue of MM where I really felt like maybe, just maybe, I was going to get this right at some point.

This is probably a good time to mention just what it’s like working with Brandon. The toughest thing about this project, for me, has simply been trying to live up to Brandon’s scripts. I don’t mean that as anything but the honest truth, either. These scripts all present different challenges, some of which I feel like I did a pretty good job with, others…where I’m pretty sure that I fell short. But they always challenged me in multiple ways, and I always had to force myself to learn something new simply to be able to pull off what the page required. I’ve never had so much fun drawing comic books.

Of course, then there’s the spread for #297…yeah, I really don’t know what’s wrong with me. I’m always wanting to get faster, trying to find ways to streamline my process…and then stuff like this happens. I dunno, I just go with it. I started planning the thing out, and it seemed we needed more and more figures in there to carry the motion back and forth, and it kind of took on a life of its’ own from there. I think I could do a better job on the piece, now, but it’s still a pretty big, crazy, only-in-a-Miranda Mercury-comic moment that I love.

And to that end, this is another example of our inker and various colorists backing me up. It’s one thing for me to take something Brandon drops in a script and run with it like I tend to do, but it’s a whole different thing for me to dump this sort of thing on the next guy in line. Sure, I got a few death threats from time to time, but it was always in good fun. At least, that’s what they say. But the crew always buckled their chinstraps and went after it, and for that I am grateful.

BT: Thought it would be fun to now present the entire “super spread” from start to finish, starting with the page of script that began this entire sordid affair…with some of the original language cleaned up a bit…

(1) Double page splash. Welcome to Mid-Air Combat, gentlemen. We got a very brief glimpse of this earlier, when Miranda was taking down the last of the Suiciders, but this right here is the pure unadulterated visual representation of Carlita Crane’s secret fighting art. The sound of course is the result of Jack Warning wiring the building’s floors to explode with that necklace of thermal detonators he was sporting a couple pages back. Which means the floor has given out and everyone on the last page is in complete free fall, plummeting twenty stories to the bottom floor the hard way. So yeah, the bad guys have screwed up.

Think of Crouching Tiger, Hidden Dragon here, where the characters effortlessly leaped from tree branch to tree branch, only in this case, Miranda and Carlita are hopping from opponent to opponent, violently taking them out in the process. The backdrop of this moment is pure chaos, bodies and debris raining to the ground, gravity holding them within her sudden grip. Miranda and Carlita are the only things that make absolute sense in this shot, the women gliding through the concrete and the glass with relative ease and definite purpose as they pound the crap out of a roomful of bad guys that actually thought they stood a chance against them.

The only way this is going to work is with a ton of afterimages and I’m seeing this as Miranda and Carlita beginning at the top right corner and zigzagging their way back and forth across the splash, increasing in size until they reach the bottom left, where they’re so close to the camera that they’re literally jumping off the page. This is the moment in every issue where Lee wishes that my hands were broken, and I swear it’s only a coincidence all of these turn out to be two page spreads

But yeah, this should be what happens when two badass female heroes team up to bash the heads in of people that can’t wait to capture them and fit them with gravity anchors. In the world of Miranda Mercury, even implied violence against women will be severely punished, and as beautiful as this is, it’s also a bit brutal—Carlita taking Miranda’s blessing to heart and breaking legs, smashing noses, snapping bones, etc.  Like I said…they really messed up this time. 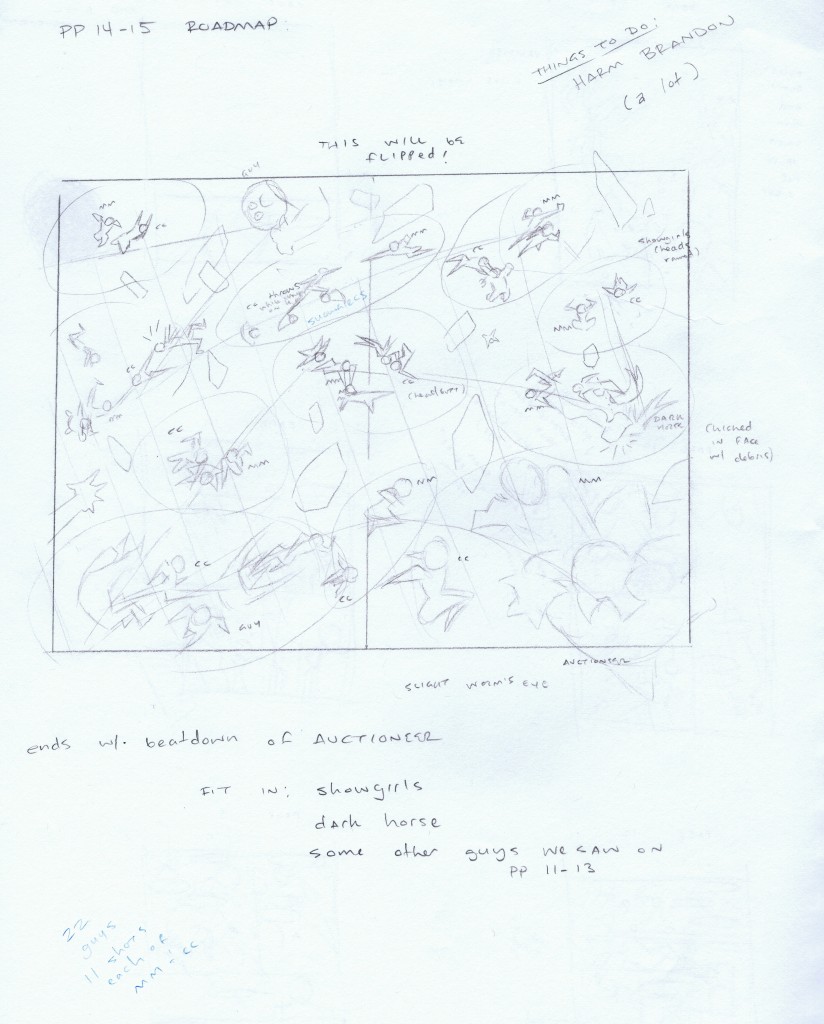 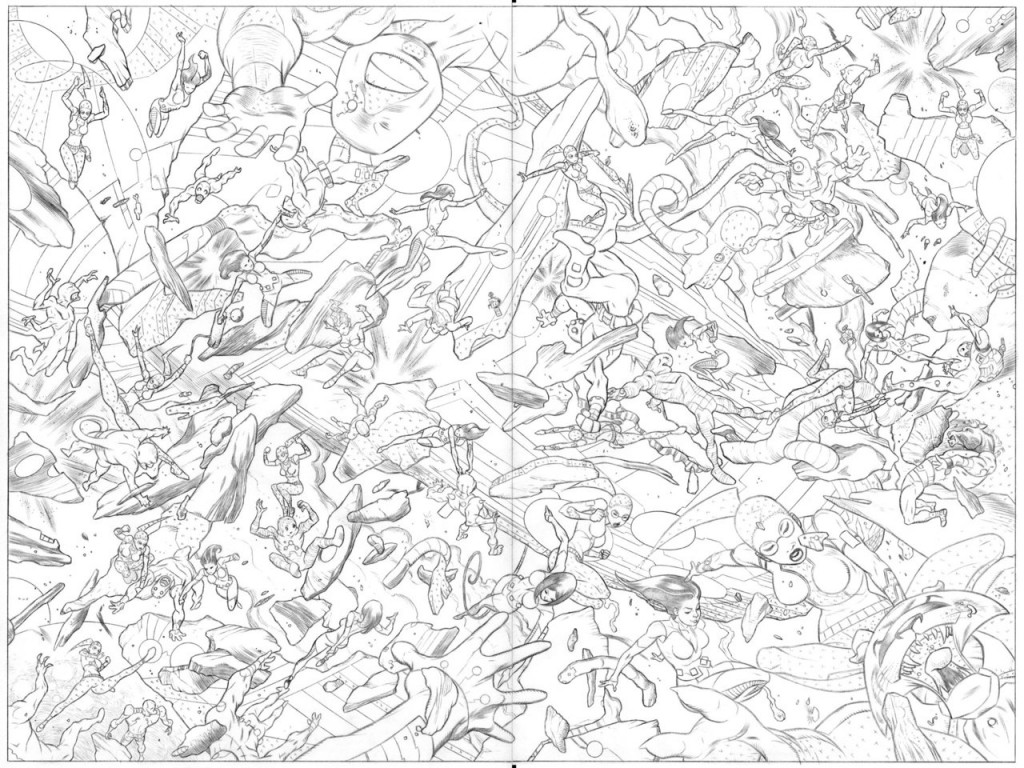 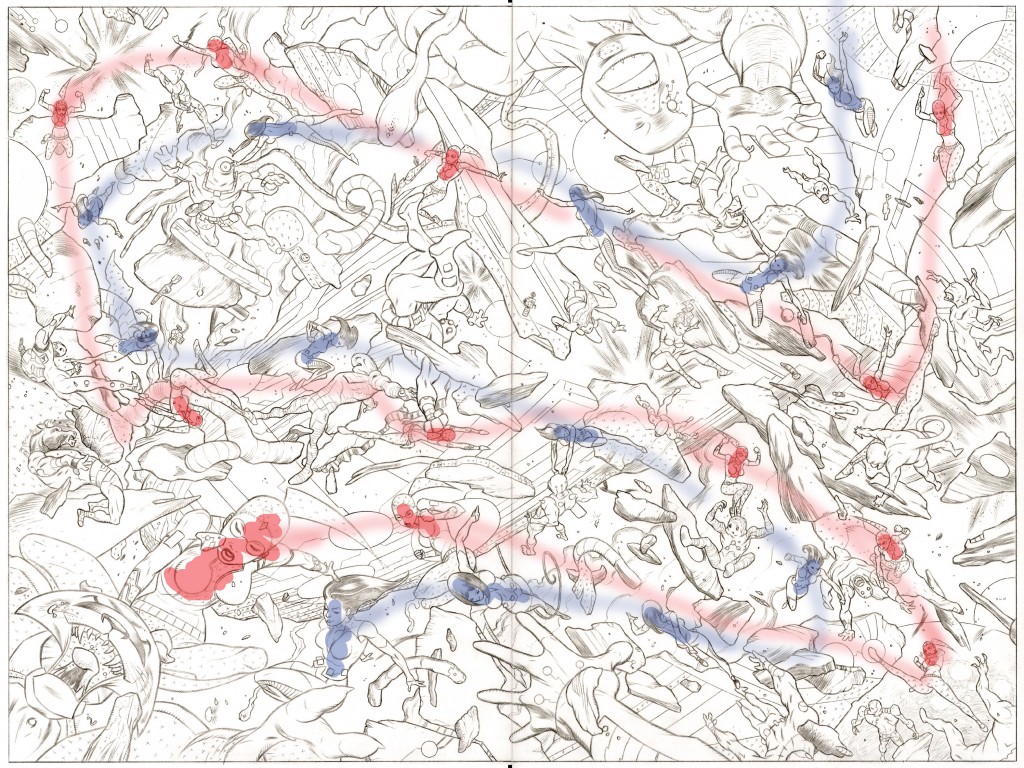 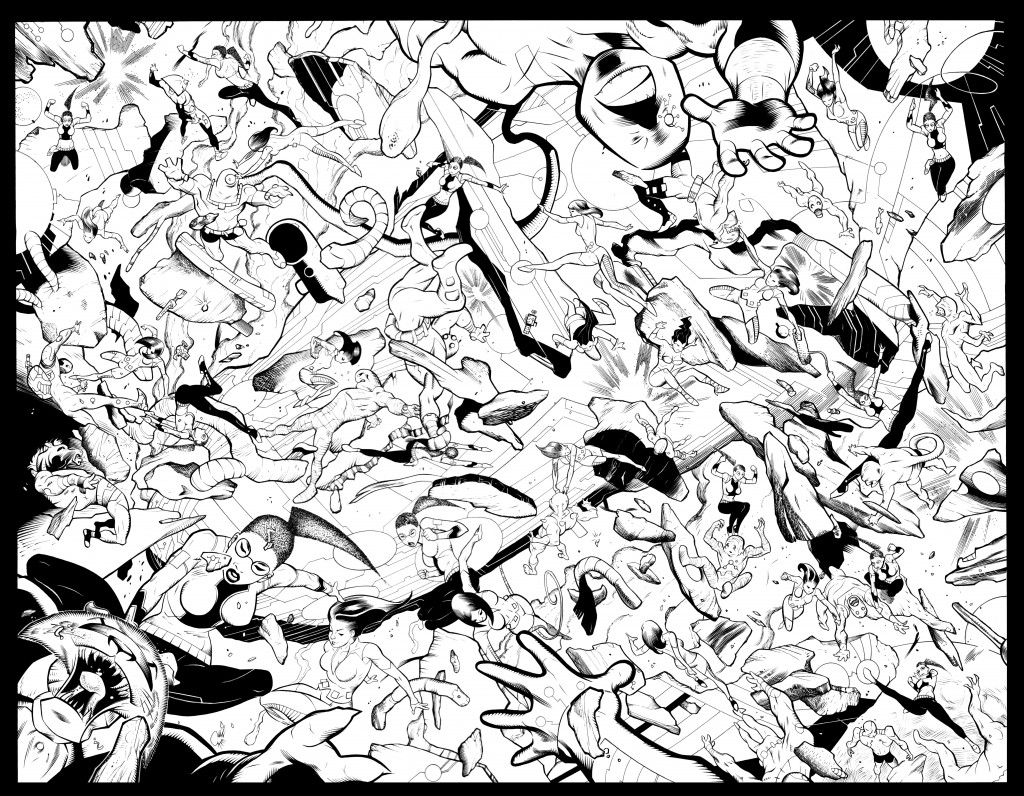